It’s always a good argument when comparing generational talents to previous ones. Especially when one generation is as controversial and divisive as the “supersuit” era in swimming. Like the steroid generation in baseball. Or Roger Maris *. Even Rocky Marciano vs Ali. Records are meant to be broken and athletes become former athletes. So the 50M Freestyle World Record chase is one to follow.

With that in mind, this is not a debate at the barbershop or Thanksgiving Dinner. This is an effort to homogenize some metrics, compile the qualitative data, and make some assumptions rather than aspersions.

When dissecting a race, every marker point carries a heuristic assumption from supervised learning. Not machine learning, but coaching eyeballs looking at variables and applying them to the actual timed finish of the race. No predictions here. Just coaching assumptions as an informed path to future training goals.

And to provide cannon fodder for the cheap seats, knee jerk reactions that inspire educated discourse on the internet – the time or distance from a swimmer’s head meeting that moment or barrier is measured. A finish requires a hand touch. And a stroke is each hand touch. Feel free to get out protractor, abacus, and stopwatch for the two videos below.

So who wore it best?

Not even a contest. Granted Cesar was part of a generation of swimmers who came to the surface quickly. Suit aided or not. But he is up at 10 meters. Churning some water as he explodes to the surface.

Meanwhile, Dressel, a decade later, is the greatest short course meters (scm) swimmer ever and uses his underwaters to his advantage even in Long Course Meters (LCM). Amazingly clean entry into the water even with what looks like a slight stumble into his breakout. And Dressel is at 14 meters.

Despite traveling four meters less underwater, Cesar takes only one more stroke (33 strokes) during the race. When viewed from above this appears to largely be a product of Dressel (32 strokes) having a bit of a sidewinder action to his 50 stroke body position.

Largely as a result of superior underwaters, Dressel is first to 15 meters by the slimmest of margins. And certainly not worthy of any p level analysis. 4.78 seconds to 4.86 seconds. Stay underwater kids – just do it.

And for those that would argue its the superman suit, remember Dressel gets the benefit of innovations to the starting blocks that allow him to maximize his athletic ability.

This part is where the juice meets the squeeze. Can the speed generated on the start be sustained as long as possible. An efficient breakout stroke can pay itself forward. Cielo does it in 13.74 seconds. Dressel in 13.93 seconds. And the race to break the 50m Freestyle World Record is over.

Because both variables are measured by the same person and same way, the only plausible argument for inconsistently bad data collection is the vantage point from the videos below. It is the relationship between both men’s speeds during the 1st 15 meters and the next 20 meters that stands out. Cesar simply doesn’t slow down as much as Dressel yet.

Dressel closes better than Cesar with a stopwatch aided 7.11 seconds to 7.17 seconds. Watch below and Cesar is clearly ‘bouncing’ to the finish, while Dressel actually appears to glide into his finish.

When comparing their “relative” split speeds to one another –

And the Challenger – Caeleb Dressel

Did Dressel miss the 50 meter free world record by .13 seconds merely because he is 6’3″? Cesar stands 6’5″. If both men have an average height and wingspan correlation for their anthropometrics, Cielo takes an extra 2 inches on that final reach.

The difference? Likely not, from the look of the race, Dressel had a slight glide into this finish. Usain Bolt ‘esque’.

Supersuits or innovative starting blocks? Marvel instead at amazing swimming and athleticism. Its why we want sports back. Usain Bolt’s top speed of 12.27 meters per second would be fast enough for him to take off… 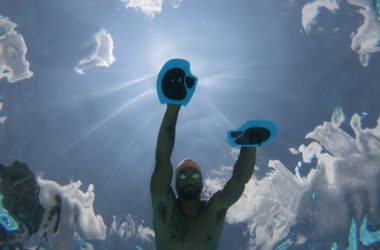 3 Swimming Sets to Improve your Endurance, Sprinting, and Technique

How to swim faster begins with great technique. Evolves into aerobic swimming improvements. And then focuses on anaerobic…