“Think different” became an apple slogan in the late 90s. And in order to try and understand breaststroke swimming, the mantra is spot on. So here’s to the crazy ones. Those that are born with it and those called to it.

And at the risk of understating the obvious, breaststroke is very different from the other three strokes. The most distinctive feature typically being an underwater arm recovery with a very unique ‘frog kick’.

On his third day of lessons at a pool in Philadelphia, 4-year-old Brendan Hansen put his face in the water and did the “big arm” freestyle stroke, but with a frog kick instead of a flutter kick…“Maybe your son should do something else. He’s not really getting this.”

Now had Hansen eschewed the front crawl all together in favor of some other sports participation, he likely would never have become a two-time Olympian, a four-time Olympic medalist, and a former world record-holder in the breaststroke.

Perhaps some just happen to stand out at their specialty. And he gave an example of how a single training change can produce profound effects on swimming performance.

Teaching the stroke to those to whom it does not come naturally “is so hard,” Hansen said. “What might work for one person may not work for the next person because it’s all about the feel and the timing.”

But “so hard”, is just a reason to get more hands-on with the movements. So some coaches teach a high elbow catch, much like the start of freestyle (or a world-class butterfly).

And it is very teachable, especially if the breaststroker in question is an average or poor kicker.

However, this approach can allow athletes to bring their head above water ‘early.’ Which in turn decreases the effectiveness of such a unique breaststroke kick‘s tremendous thrust.

Interestingly, considering the importance of the perpendicular relationship of limbs and body from a mechanics perspective, unlike the other three strokes, the legs take more responsibility for propulsion. This is the ‘why’ behind why the legs drive the stroke.

Although there are many different styles of breaststroke, the goal of any program and/or season is to develop a great leg kick with the ability to adapt the stroke rate from 100 to 200 yards/meters.

Many athletes simply do not understand where the ability to ‘speed up’ a stroke cycle most effectively originates.

These breaststrokers speed their hands up when they want to go faster. And it results in a very inefficient swimming motion. Great athletes keep their arm pull speed in unison while increasing leg action power.

Still, others bring their kick up even sooner and/or make their feet move faster to increase forward thrust. This ‘rear-wheel-drive’ thinking can win or lose many IM and breaststroke races with misplaced effort.

Typically the best breaststrokers in history were best in the world at both the 100 and 200-meter breaststroke. They kept the tempo of their arms at the same speed for different distances. To go faster, they simply kick earlier and quicker.

The higher (closer to the chest from front to back) the feet can ‘set up’ perpendicular to the body, the longer they will push the water in the correct direction. A great breaststroke kicker does this so well that it appears they are pushing off of solid ground.

But we are seeing a shift in breaststroke swimming at peak velocity. And in the conservation of energy for ‘effortless’ velocity over the 200 m breaststroke. Like with freestyle technique for the outlier events.

Specifically, watch most short course specialists, as well as Adam Peaty and Katie Meili. Fundamentally Peaty and Meili perform a unique version of the breaststroke kick phase that allows them to get more “power” from their catch. Muscle movements so periodically sequenced that it requires slow-motion video to study a complete cycle.

Or trace Daniel Gyurta’s arm movement from shoulders shrugged to outstretched elbows as he’s swimming breaststroke. And notice with his head above water, Gyurta is breathing in unison with a chest inhalation while preparing to thrust forward with purposeful power.

Regardless of your stance on tempo and kick effectiveness. Keep the head down near the shoulders on the out sweep. This period sets up either kicking action and makes for a timely breath during the recovery phase. It also keeps the hands from pulling back too far or dropping the elbows during the pull phase.

The breaststroke requires the most amount of energy of the four swimming styles (Barbosa et al., ), and this can lead to poor performances if an athlete is unaware of technique failures resulting simply from decreased energy availability.

Neuromuscular fatigue can be defined as: (i) the failure to maintain the required or expected force, accompanied by changes in muscular activity (Dimitrova et al.,); and (ii) the inability of skeletal muscle to generate high levels of muscular strength or maintain these levels over time (Enoka and Stuart,).

With that in mind, researchers showed a non-linear trend for neuromuscular fatigue, with the 2nd and 3rd lap being the critical moments of a 200m breaststroke race.

Decreases in swimming speed are related to SL, SI, and increases of the SR in the last lap, increases in the blood lactate concentration after the test, and a non-significant increase of the amplitude…

The conclusion was that both biomechanical and physiological training for breaststroke swimmers should address the onset of exponential fatigue, specifically to prevent sharp velocity decreases during the middle 100 of the 200-meter breaststroke – or bad race strategy.

Kicking into a tight body line. Whether the swimmer is gliding for a short or long time, kicking into a streamlined body position is imperative for carrying momentum from the kick.

And the timing of finishing that kick into the extension referenced is a truly unique connection. While pulling back, the feet are loading. And then there is the slightest of pauses before the kick explodes with perfect timing. Like an isometric movement, just above the hip (abdominal muscles) or a rubber band at full extension, just before it snaps.

Kosuke Kitajima, Soni and now Efimova – “love them or hate them” do this better than any other world-class breaststroke swimming.

Breaststroke Pullout and the Dolphin Kick

What happens below the water surface stays there. Right, Cody Miller?

The underwater pullout in breaststroke is a strong point of contention. As of the 2005 season, though still optional; one downward dolphin kick is allowed. But at the elite level some throw in an extra for good measure and at the risk of disqualification.

Nevertheless, from a streamline, swimmers separate their hands just outside of their shoulders. And then, like a butterfly propulsive phase, the arms swing past the chest toward the hips. After a moment’s pause, a breaststroke kick is initiated as the arms simultaneously bend at the elbow, while remaining close to the body. Upon completion of the kick, the hands move past the chest, and the head breaks the water’s surface to begin the first stroke cycle.

The pullout at the start and after each turn is peak velocity during breaststroke. So the easiest way to improve performance during a practice/season is to focus on the start and the turns.

Great breaststroke swimming is both complex and straightforward. The movements above are easily individualized for training. Differences in flexibility, limb and torso length and buoyancy all play parts in choosing the best motion for each swimmer.

Assuming the task of improving the breaststroke kick is part of a program for improvement, choose different catch technique(s) based on limb length (anthropometrics). In other words, recreational swimmers and those learning breaststroke may need to adjust swimming strokes. But all are capable of enjoying some ‘easy speed’.

So while in every other swimming stroke, your arms provide the main propulsive component. In breaststroke, remember that the legs drive the “human race forward”.

Inch Worm, Vertical Breaststroke Kick against the Wall, Kick on your back 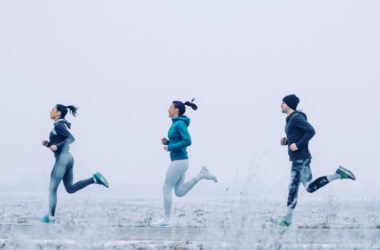 The Stretch Shortening Cycle for a Plyometric Boost

The average male is capable of jumping straight up in the air about 16-20 inches. A really good…